Even in 2017, it is quite common to find the hand built, artisinal, bespoke development environment. As a leader in your technology group you will recognize this as the first two weeks of a new-hire's tenure where they are not contributing any sort of value, but constantly interrupting their team mates to get to a point where they can.

Vagrant makes such a situation a thing of the past, but that is only the beginning.

Developers develop. They change things and they need the freedom to take risks with software component upgrades.

This tutorial is designed to introduce concepts and leave you with a working Python development environment. It assumes no knowledge of Vagrant or its virtualization concepts. Because much of the effort will be downloading large files, plan for it to take between 2 and 3 hours.

By far the most important concepts to understand during this tutorial are those of workstation and guest:

These concepts are important to understand so that you have a firm idea of where the execution of a command takes place.

A couple of other important concepts are hypervisor and mount point.

And for the purposes of this article the projet root and project directory:

To make sure your workstation is ready, you must install Vagrant and Virtualbox. You will also need to create a place to work.

To install the latest version of Virtualbox, downloads are found here. You will need to run the install process.

To install the latest version of Vagrant, downloads are found here. It will take 15 minutes or more.

Gotcha!: Vagrant and Virtualbox should be kept as up-to-date as possible. Upgrading one can lead to problems with older versions of the other. This tutorial was written for:

On your workstation open a terminal and create a workspace in your home directory and move into it:

What Happened?: Paths will matter, so we want to use something less generic than "code". The name victorycto is unlikely already in your home directory. The name of our project is vagrant-101. Eventually this is where our little web app will live.

In the directory ~/victory/vagrant-101, create the Vagrantfile

Copy the below into the Vagrantfile and save it.

Now start the guest server on your workstation. This could take up to 30 minutes, so please read ahead:

What Happened?: There are quite a few things going on here:

Let's make this more concrete by working with the guest a bit.

Pro Tip: The directory you are in on the workstation, ~/victorycto/vagrant-101 is the full context for this guest. You can have a different project in a different directory with a different Vagrantfile. When you issue the vagrant up command there, you will get a second guest on your workstation.

What Happened?: By using the vagrant ssh command you have used the ssh port forwarding to become the ubuntu user on the guest.

Pro Tip: Study that output as it is happening and work at understanding what it is telling you. If something is wrong with the guest, it is highly likely the answer to how to fix it is right there in the output!

One of the biggest pay-off with Vagrant is the separation of the run time environment from source development. This will be illustrated in great detail later. Fror now lets explore the concepts that underly this capability.

Create a file in the ubuntu user's home directory.

What Happened?: Nothing you haven't done before most likely. You just created an empty file in the home directory on the guest. Note however that this file is completely invisible to your workstation.

Still on the guest, create a file in the /vagrant directory

Open a different terminal and see the file on your workstation.

Pro Tip:: Use terminals of different colors to distinguish between your workstation and the guest. Below, black is the guest and red is the workstation. 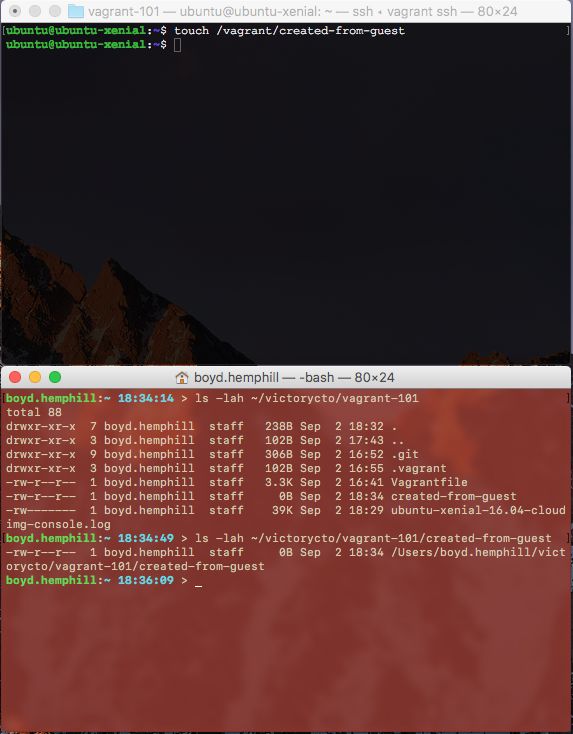 On your workstation create a file in the project directory.

From your guest terminal see the file.

Gotcha!: If you are not seeing the files, ask yourself the following questions:

Provisioning a machine, in Vagrant terms, is the act of installing packages, users, and other configurations so that it is able to run an application.

It is the act of provisioning your Vagrant guest that allows you to separate your development environment (essentially a git project with your code in it) from your run time.

(servers as code) Further, the configuration of your machine is now described in code that is kept in source control with the project. This means that a developer who needs to add a package can do that without making the change to their workstation.

(disposability) Further still, if the developer makes that change and it turns out to be a bad one, then can simply destroy the guest with vagrant destroy, remove the package from the provisioning code, and launch a new guest with NO need to rebuild the workstation.

(sharing) Further even still, if the change is good, then they push the project and ask teammates to pull and relaunch their own guests. Your team is working from the SAME RUNTIME.

The consequences of this on your teams productivity and creativity are substantial:

(servers as code) No more will it "work on my laptop" but not in the test environment. The code to build the development environment is the code for the test and production environments.

(disposability & sharing) Developer are free to try and upgrade of important libraries knowning they can easily back out any number of changes. What could have been days of risk is now minutes.

(security) Because the configuraiton is code, you can easily upgrade databases, languages, frameworks and even operating systems. A developer and operator (see the DevOps?) can collaborate in a couple of hours to show that all tests pass when moving from Ubuntu 14.04 to 16.04 as an example.

Replace your Vagrantfile with the the following:

On your workstation, issue the command

Remember that my workstation is the red terminal.

What Happened?: When Vagrant ran this time, it exectued the statements in the shell provisioner to update the package lists and then upgrade older packages.

Don't let the simplicity of this example fool you. If you can script it, you can put it in the SHELL provisioner.

GOTCHA!: The shell provisioner is not idempotent. You can really only run it once then you will have to destroy the machine to try again. This gets very old very fast. Look for another article on how to use Ansible or Chef to provision your guest.

Developing in a Vagrant Runtime

The rest of this tutorial is based on simple Python Flask application. Don't worry if you are not a Python developer. This is truly simple stuff for anyone with a technical background.

On your workstation (as if you were a developer working with your dependencies) create the requirements.txt file to install dependencies:

Place the folloowing in the file:

On your workstation, replace your Vagrantfile with the following

On the workstation, provision the Vagrant guest:

Take a moment to read through what happened. You should see pip (Python's package manager) get installed by aptititude then it will install each of the dependencies.

Now consider what happend for a moment. You created a file on your workstation (requirements.txt) then used that file within the context of the guest by referencing it in the SHELL portion of the Vagrantfile.

On your workstation, create a simple Flask application.:

Place this code and save:

Gotcha!: Are you in the directory ~/victorycto/vagrant-101 I will leave it to you to remember that from here on out.

Trust but Verify: On your guest, see that the hello-world.py file:

Now it gets interesting.

On the Vagrant guest, start the application

What Happened?: The application started and was placed in the background. You can check this with the command ps -ef | grep [h]ello

Excercise the application on the guest:

The next ticket in my developer queue says, "A user should be greeted to our site with the message: "Hello from VictoryCTO!"

Open the hello-world.py file on your workstation and change line 6:

Don't forget to save it.

On the guest you will see the application restart. Now exercise it again.

What you have seen is the separation of the development environment from the application run time. You can develop on your workstation with all the usual tools you would use, but when you exercise the application to test, it is happening on a guest machine configured like every one elses on the team (and hopefully those in test and production!).

But curl is Lame

Obviously we want to view our application in a browser on our workstation rather than from curl on the guest. In fact, we would like to interact directly with the guest as little as possible.

Now add to the Vagrantfile one more time:

This time when the machine comes up you will see it configure itself adding the necessary packages, pip packages and it will start the application.

Now hit the site in your browser here.

It fails! But why? This is actually not a configuraiton or Vagrant problem. Its an application issue. By default the flask app runs only on the local interface of the guest. We will have to change the app. Lets do that on our workstation:

Change and save the file:

Now hit the site in your browser here, and you will see our welcome message as expected.

Finally, lets prove we don't need to interact with the run time by marking up the welcome message with heading tags.

Change and save the file:

Hit the site in your browser here one more time and realize you can now develop in a runtime that is described entirely by code.

What we have shown in this article are the following concepts:

If there is a demand, we can go deeper into Vagrant with an Ansible provisioner and a more production-like runtime. Let us know at VictoryCTO.

This article was specifically prepared for the Agile Austin DevOps S.I.G. community. We'd like to thank them for the opportunity to present this topic.

Message Successfully Sent!
Thank you for reaching out, a member of the Victory Team will contact you shortly.